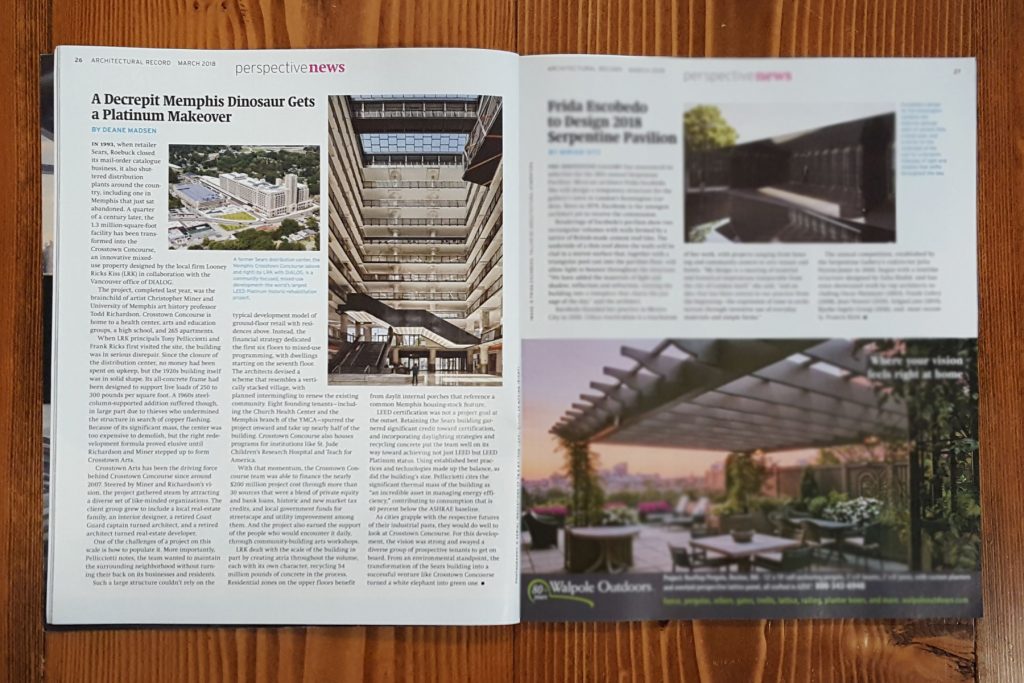 Declines in U.S. manufacturing and industry have led to a reverse hermit-crab effect, wherein companies are leaving behind empty shells of buildings that are too large for other companies to inhabit comfortably. But within these husks lies an amount of embodied energy so great that the environmental impact—not to mention financial cost—of demolishing them is also too big to bear. While adaptive reuse of industrial facilities is hardly new behavior, the scale and environmental consciousness of a recent redevelopment in Memphis called Crosstown Concourse serves as a demonstration of how cities can turn empty warehouses into communities of symbiotic entities beneath a single roof. Below is an excerpt from an article that appeared in the March 2018 issue of Architectural Record.

In 1993, when retailer Sears, Roebuck closed its mail-order catalogue business, it also shuttered distribution plants around the country, including one in Memphis that just sat abandoned. A quarter of a century later, the 1.3 million-square-foot facility has been transformed into the Crosstown Concourse, an innovative mixed-use property designed by the local firm Looney Ricks Kiss (LRK) in collaboration with the Vancouver office of DIALOG.

The project, completed last year, was the brainchild of artist Christopher Miner and University of Memphis art history professor Todd Richardson. Crosstown Concourse is home to a health center, arts and education groups, a high school, and 265 apartments.

When LRK principals Tony Pellicciotti and Frank Ricks first visited the site, the building was in serious disrepair. Since the closure of the distribution center, no money had been spent on upkeep, but the 1920s building itself was in solid shape. Its all-concrete frame had been designed to support live loads of 250 to 300 pounds per square foot. A 1960s steel-column-supported addition suffered though, in large part due to thieves who undermined the structure in search of copper flashing. Because of its significant mass, the center was too expensive to demolish, but the right redevelopment formula proved elusive until Richardson and Miner stepped up to form Crosstown Arts.