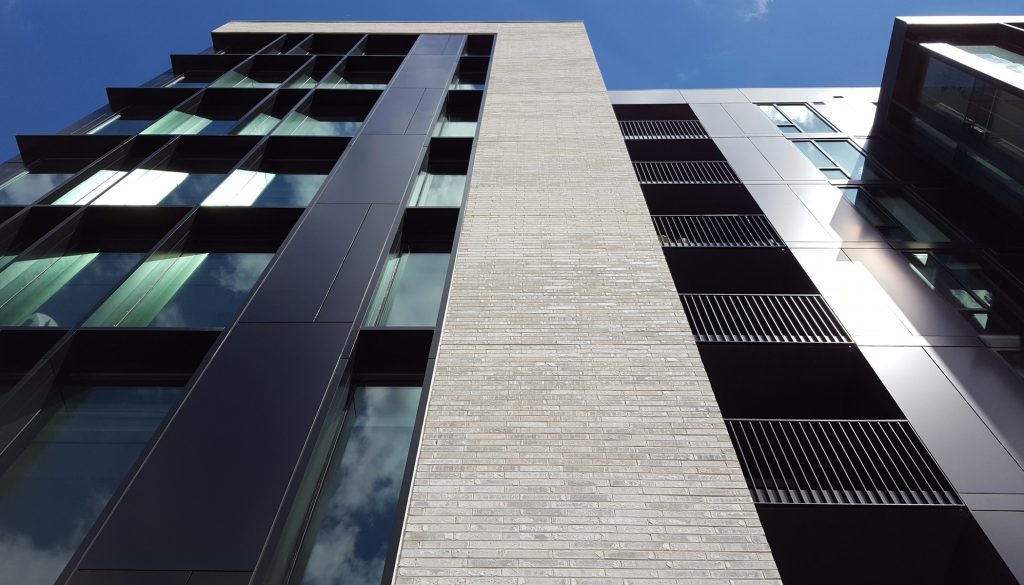 I was pleased to contribute two articles to ArchitectureDC Magazine’s annual residential design issue (Summer 2018), looking at housing from both the single-family and multifamily perspectives. On the single-family front, it was David Jameson’s Hull House in Alexandria, which is a contemporary take on the gabled-roof silhouette so prevalent in that neighborhood. The multifamily project was 880 P Street by Shalom Baranes, the last piece of a multi-block development puzzle in the heart of Shaw centered around the historic market at O Street. An excerpt from the article follows. 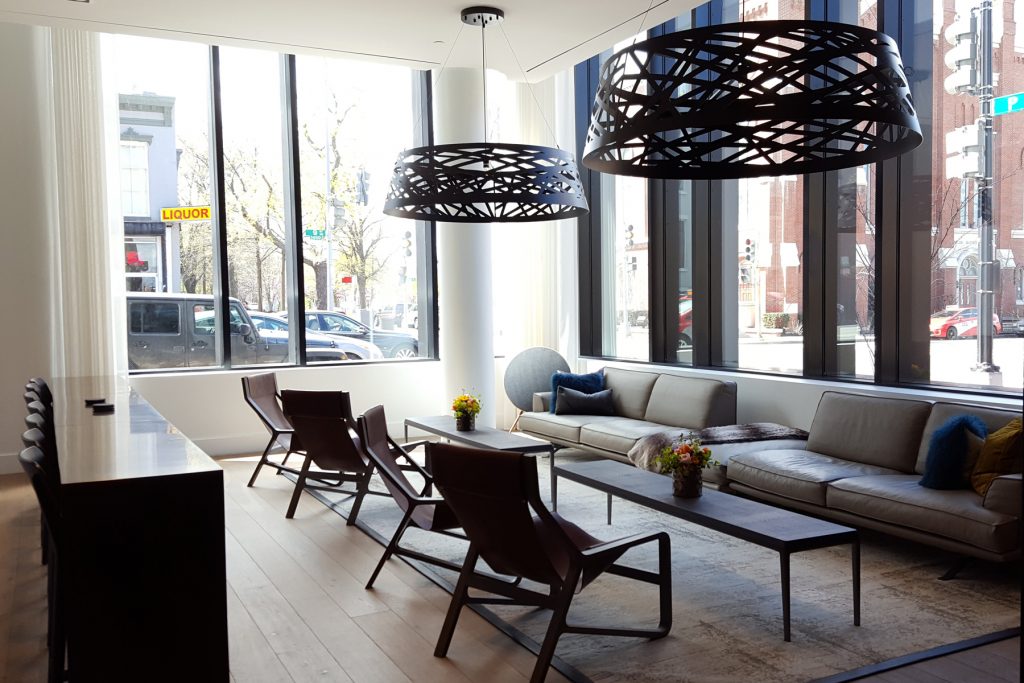 Fifty years ago this spring, as the nation recoiled from the assassination of Rev. Martin Luther King, Jr., its capital descended into four days of that left whole swaths of Washington in smoking rubble. A quarter century later, the Victorian-styled O Street Market—which had served continuously as the Shaw neighborhood’s public marketplace since its 1881 completion, but was slow to re-emerge from that post-riot rubble—was again the site of turmoil as gun violence erupted, injuring eight people and killing one, 15-year-old Duwan A’Vant.

In the two decades that followed the 1994 shooting, O Street Market fell into disrepair. A grocery chain, Giant, opened and paved over the rest of the two blocks bounded by O Street, NW, to the south, P Street to the north, and 7th and 9th streets to the east and west, respectively. Now, thanks to a forward-thinking re-investment initiated by Roadside Development in 2001, the O Street Market is restored, and the two blocks are filled with a hotel, various restaurants, and new mid-rise residential buildings that bring density and housing into a historic district that needs both. The last piece of that puzzle, designed by Shalom Baranes Associates (SBA), is 880 P Street.

“I think the building is an example of how you can do contemporary design in historic neighborhoods, and it’s going to be OK,” said Robert Sponseller, AIA, who is a design principal at SBA, and who led the master plan. “You can put modern and old together, and there’s a synergy you get when you do that that’s more powerful than just recreating the old.” 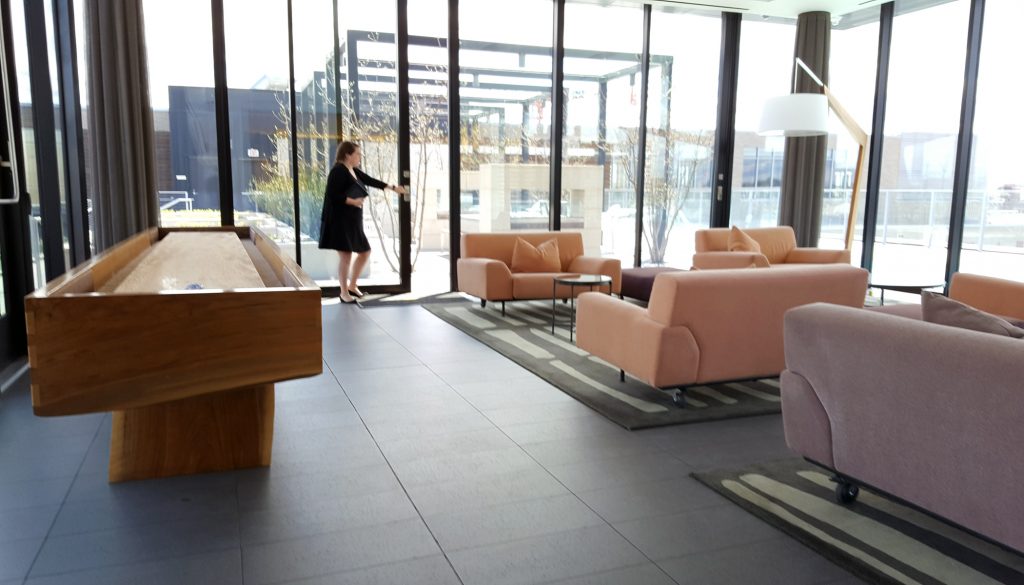 Rooftop amenities include a swimming pool, a grilling deck, an outdoor shower, and this lounge with shuffleboard table

The 880 P Street project occupies the L-shaped northwest corner of the site, and completes the second phase of the overall City Market at O master plan, which was also designed by SBA. The site development restores the 8th Street right-of-way that had been eliminated in the mid-1970s, realigning it with the L’Enfant Plan, and resurrects the O Street Market with the insertion of the Giant within its shell (the building was added to the National Register of Historic Places in 1995).

Phase one of the project also included the Hodge—an apartment tower of 90 affordable units aimed at seniors, to fulfill requirements of Washington’s inclusionary zoning laws—as well as two, 10-story market-rate condominium towers and the 182-room Cambria Hotel at the southwest corner of the site. While residents of the Hodge must meet income thresholds—18 units are set aside for people who earn less than 50 percent of area median income (AMI), with the other 72 for those at or below 60 percent AMI—the other three market-rate towers, including 880 P Street, have no such restrictions.

The 880 P Street building and its two sibling apartment complexes aim squarely at a higher-income demographic, with one-bedroom units starting upwards of $2,400 per month (rents at the Hodge, by contrast, are $964 to $1,169). Billed as luxury living, the units themselves are compact, but outfitted with finishes such as Italian cabinetry and Corian countertops. Floor-to-ceiling windows and private balconies afford broad views outward and daylight penetration within. In two-bedroom units, Raydoor fixed and sliding partitions take advantage of the abundance of daylight to cast a diffuse glow in the secondary bedroom.

A terrace provides a second entrance to the 1,000-square-foot Open House at the Making Room exhibition at the National Building Museum.

Over the last few decades, our lifestyles have changed, but the types of homes in which we live have not. That’s the driving thought behind Making Room: Housing for a Changing America, a new exhibition that examines possibilities for better housing, which opens at the National Building Museum (NBM) in Washington, D.C. on Saturday. Through analysis of residential and zoning codes, case studies, and a centerpiece 1,000-square-foot demonstration home constructed within the NBM galleries, museum visitors will gain insight into flexible living arrangements that suit a variety of scenarios now more common than the nuclear family.

The exhibition begins with an analysis of current housing conditions by the Citizens Housing & Planning Council (CHPIC), conveyed through infographic charts and introductory text. Despite a marked decline in nuclear families—or married couples with children—much of the housing stock is still geared toward this family type. However, lifestyle changes have reduced nuclear families (now only twenty percent of current national households), and increased other modes of living. Single people make up a much larger demographic proportion; yet only 11.63 percent of housing stock is one-bedroom, with studios making up just 0.87 percent. The other 87.5 percent of housing stock comprises two-, three-, four-, and five-bedroom houses.

To address this imbalance between housing type and lifestyle, the exhibition team—led by Pierluigi Colombo, art director of Italian furniture producer Clei, Lisa Blecker, marketing director of Resource Furniture, and exhibition curator Chrysanthe Broikos—created the Open House, a roughly 1,000-square-foot installation of a home, furnished by Clei, that will display three living scenarios over the course of the exhibit, on view until September 16, 2018.