How Architects Are Helping Communities in Puerto Rico Rebuild

Panelists at this Metropolis Think Tank event at Perkins+Will’s D.C. office stressed the importance of remembering that there’s no one-size-fits-all fix.

It has been more than a year since Hurricanes Irma and María ravaged Puerto Rico. Even now, accurate estimates of the actual death toll—in excess of 3,000 fatalities, according to the latest available report—remain elusive. The commonwealth’s power grid still lies in ruins.

Simply put, “the island stopped working after the hurricane,” said Armando Nazario, a senior designer at Perkins+Will, at a recent Metropolis Think Tank panel convened at the firm’s Washington, D.C., office. The discussion, moderated by Metropolis director of design innovation Susan S. Szenasy, dwelled on the challenges of delivering aid to Puerto Rico’s unevenly developed and funded urban and rural communities, each with its own pressing needs. “We also don’t have the census data that helps support this [to make] each community self-sufficient,” Nazario explained.

Working with representatives from various international organizations, Nazario and his Perkins+Will colleague Yanel de Ángel, an associate principal, helped spearhead ResilientSEE, which aims to “build a resilient Puerto Rico.” Self-sufficiency, de Ángel affirmed, is key to meeting the group’s goal because “if you’re not feeling empowered, a sense of responsibility cannot be bestowed.”

For municipal rebuilding efforts, the panelists stressed the importance of remembering that there’s no one-size-fits-all fix. For some neighborhoods, residents want centralized community hubs with dedicated solar panels; in others, people are channeling resources into individual household solar systems. Other regions have looked to invest in water filters.

“You have to start that conversation with the community,” said Marilyn Shapley, a senior policy adviser with Mercy Corps, a nongovernmental aid organization. “We have to start with conversations of what that risk is, what their risk tolerance is, how their safety nets are in place, if they have them in place. It does take a village, and it does start with actually talking to every single village.”

Read the full story at Metropolis 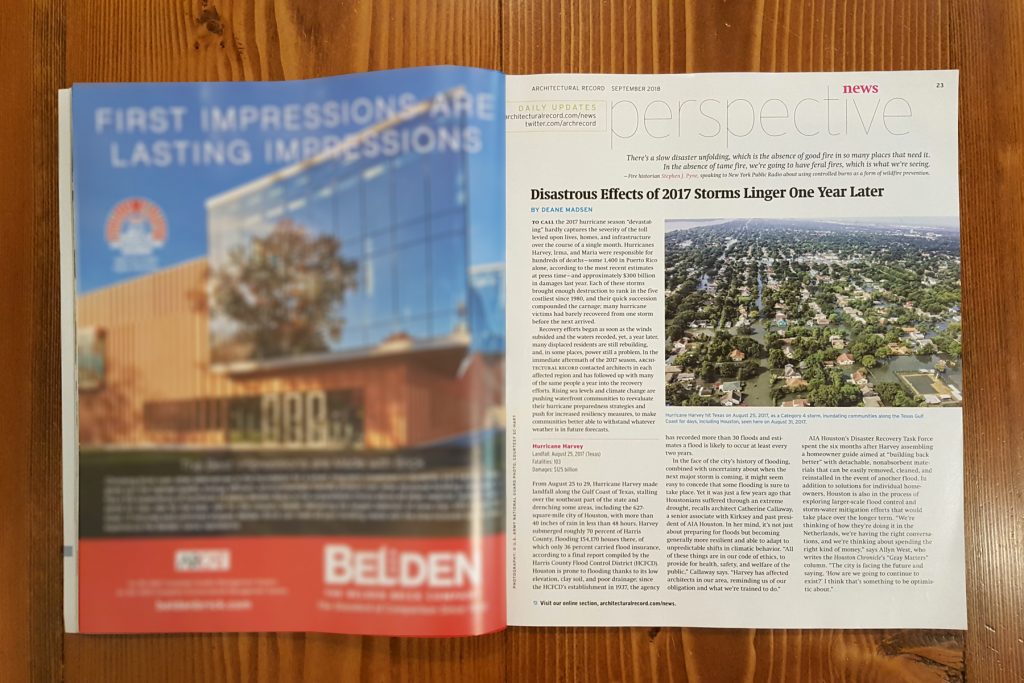 URL "http://www.architectmagazine.com/award-winners/aia-presents-designing-recovery-awards.aspx?" does not exist, is not readable or is protected against scraping.
Check if your IP address "23.229.234.65" has access permission to this URL.
Local server is unable to handle cURL functions.
Possible reasons:
- 'allow_url_fopen' option from php.ini settings file is set to off.

Ask your system administrator turn on the 'allow_url_fopen' option from php.ini and try again.
Headers received:
URL "http://www.architectmagazine.com/award-winners/aia-presents-designing-recovery-awards.aspx?" does not exist, is not readable or is protected against scraping.
Check if your IP address "23.229.234.65" has access permission to this URL.
Local server is unable to handle cURL functions.
Possible reasons:
- 'allow_url_fopen' option from php.ini settings file is set to off.