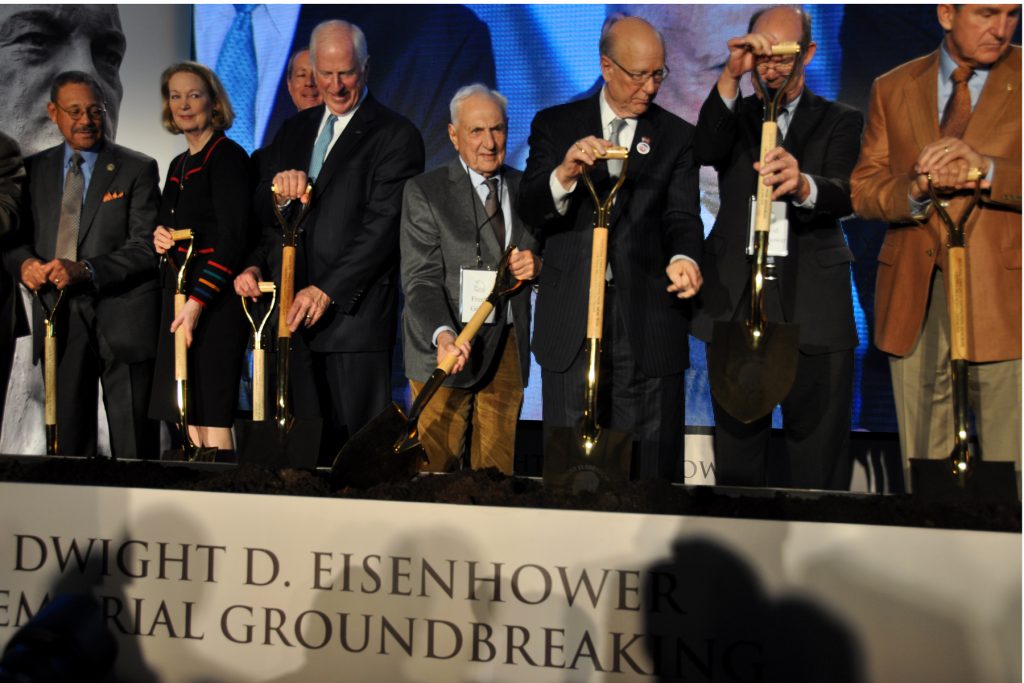 Members of the Eisenhower family and Memorial commission, along with Frank Gehry (center) break ground on the Dwight D. Eisenhower Memorial in Washington, D.C.

It was my great honor to cover the Dwight D. Eisenhower Memorial groundbreaking ceremony, which was held in Washington, D.C., on Nov. 2. Descendants of the former president as well as Memorial commissioners and members of the design team–including architect Frank Gehry–were on hand to mark the start of construction for a memorial that has been held up in contentious legislative battles for most of a decade.

“We’ve waited so long and [have] been through so much on it,” Gehry said after the ceremony. “But compared to other memorials, I think we’re half the time! [With] everything that went on, I always believed in the Eisenhower family.”

Gehry also spoke of his personal connection to Eisenhower in an official press release from the Eisenhower Memorial Commission; many of his family members lost their lives in Germany leading up to World War II:

“This project has been an enormous honor for me both professionally and personally. I was 16 years old when Eisenhower defeated the Nazis and led American to victory in WWII. I had lost 33 members of my family in the camps, so his victory was all the more meaningful to me. His leadership in peacetime was as inspiring. He led the country with strength, but also with great humanity and humility. I hope that these values are captured in the memorial, and that it will be a place to honor and to learn from one of the greatest heroes that the world has ever known.”

In its October meeting, the National Capital Planning Commission (NCPC) approved final plans for the proposed memorial to Dwight D. Eisenhower as well as renovations that would transform Washington, D.C.’s Carnegie Library into an Apple Store.

The Eisnenhower Memorial, designed by Frank O. Gehry Architects with sculptor Sergey Eylanbekov and tapestry designer Tomas Osinski, has been the source of lengthy and contentious debate, in large part due to inclusion of metal mesh tapestries depicting various scenes of President Eisenhower’s life and achievements, but received support from Eisenhower’s family last year. 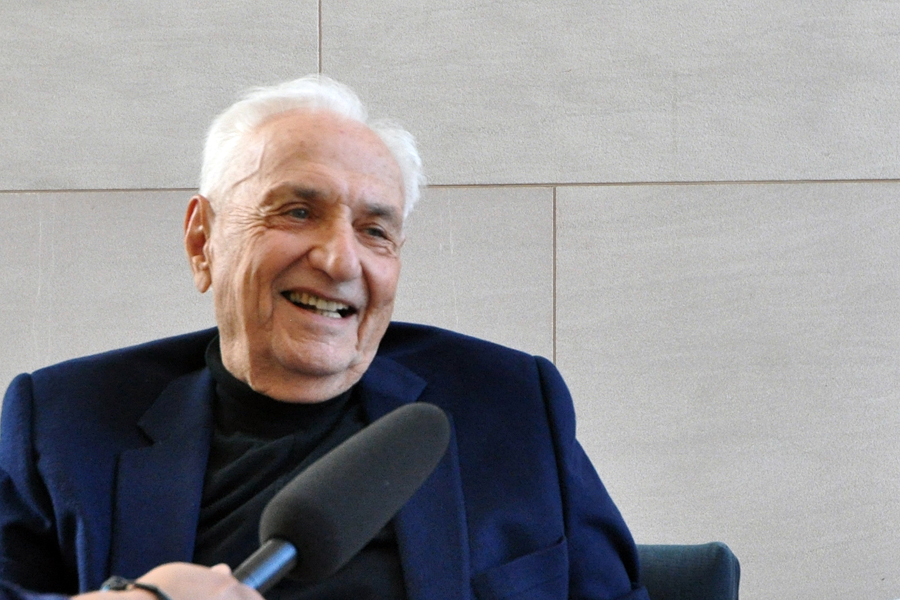 Watch Frank Gehry explain his design for the Eisenhower Memorial.

A groundbreaking ceremony for the memorial will take place next month. 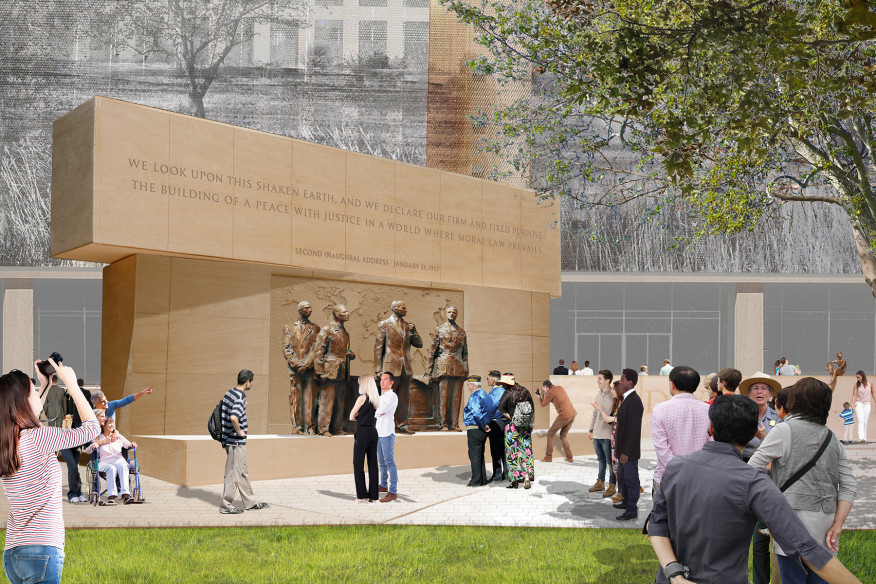 Ten years of legislative battles over the Frank Gehry design for a memorial to President Dwight D. Eisenhower in Washington, D.C., have drawn to a close with an announcement today from Senator Pat Roberts (R-KS), chairman of the Dwight D. Eisenhower Memorial Commission, that the Eisenhower family will support Gehry’s design going forward.

In a letter to Secretary James A. Baker, III, a member of the Eisenhower Memorial Commission’s advisory committee, Susan Eisenhower, granddaughter of the late former president, conceded approval of the proposal. “While some of us may have had other preferences in the past, all of us support your proposal,” she wrote. “We recognize that your recommendation offers a compromise, one which all Americans who loved the general and the president can support.” 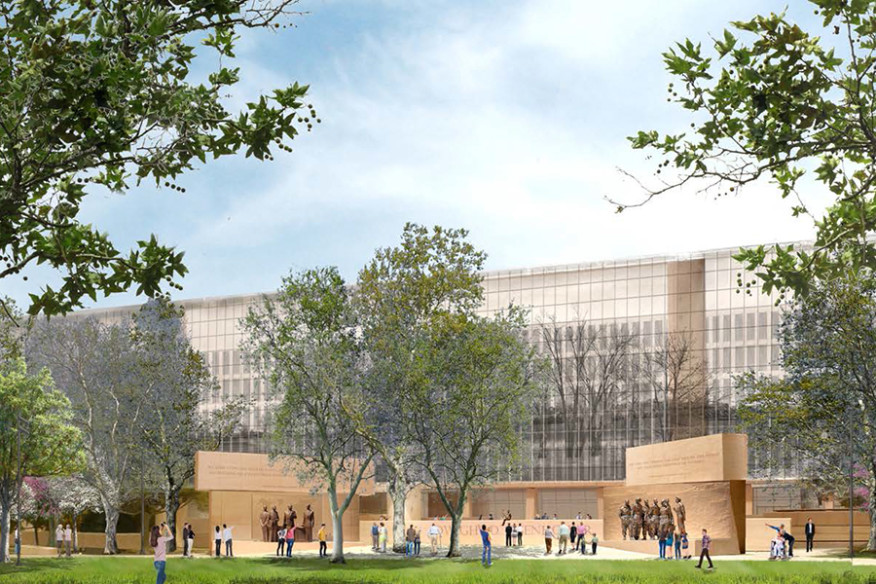 Courtesy Gehry Partners/AECOM | View of memorial core and tapestry from Maryland Avenue, with Lyndon B. Johnson Department of Education Building behind the tapestry

Following a protracted battle with design revisions and family outcry over Frank Gehry, FAIA’s proposal for a memorial to Dwight D. Eisenhower—now a joint venture between Gehry Partners and AECOM—the National Capital Planning Commission (NCPC) approved the final site and building plans [PDF] at a meeting held July 9. In the NCPC’s recommendation, the commission confirmed that the final memorial design “satisfies NCPC’s adopted site selection design principles” and that the approval “will not have a significant impact on the human environment.”