When asked about inspiration for the Capitol of Panem, Hunger Games director Gary Ross said the production team looked at Brutalist architecture:

“It’s set in the future but needs its own past. So the Capitol had to have a sense of history. So we went for architecture that was massive, concrete, monumental. We took our inspiration from mid-20th century Brutalism–and as I was looking at this I realized the power is expressed through open spaces, so that was the first reference point. We looked at great seats of power, like Red Square, and went from there.” [quoted from Empire Magazine, March 2012, p 95]

Mr. Ross has his facts a little twisted, it seems. While it may be that the manner in which punishments get meted out by representatives of the Capitol is brutal, and its ruler, President Snow, encourages the Games–which are brutal enough on their own–as a reinforcement of the Capitol’s power over the other districts, still, saying that the brutal Capitol regime needs to be represented by Brutalism seems like the misguided effort of a publicist to say something seemingly knowledgable about architecture. It would, of course, be easy for the layperson to think about the Brutalist style as being in keeping with a government with brutal tendencies.

Except that 1) Brutalist architecture is not the product of brutal regimes, nor representative of them; and 2) most of the architecture in the movie is not Brutalist.

Here’s what a Hunger Games fan site posted as examples – a collage of Brutalist buildings culled from the Wikipedia entry on Brutalism: 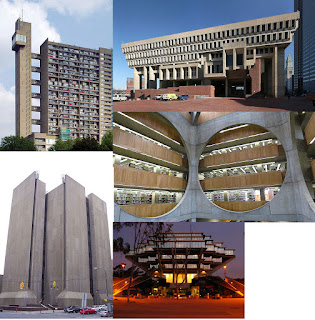 What was presented in The Hunger Games was not that. The Capitol Terminal, for example, while massive, could hardly be considered rough or unfinished, as it was covered in a glistening white–possibly stone–with various electronic billboards. Until I get permission from Lionsgate to post images of Panem, I’ll refrain from doing so (I thought about posting some screen-captures, but upon reading their legal terms, thought better of it); in the meantime, you’ll have to take the Capitol tour on their website or see the movie to know what I’m talking about. But here’s a quick refresher on Red Square: 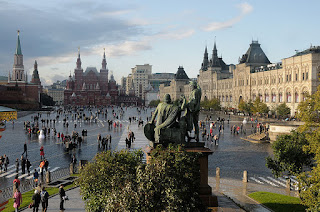 [from Wikimedia Commons]
I guess the problem is that without showing what I mean, it’ll be hard to prove a point. But the brief panning views of the city revealed repeated boxy structures that, while ponderous, are more in line with antique stone block sets than with Brutalist buildings: 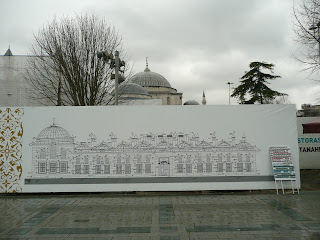 Also, pictured on the wrapper is a south elevation, though we’re looking at the eastern side of the building. This means that there’s also a disconnect between what’s on the wrapper and what’s behind it, not only spatially, but orientationally as well. Scale seems to be determined by the size of the scaffolding supporting the wrapper, not by any architectural standard. I guess the idea is to make people feel like they’re not missing out on what the buildings should look like, and pristine white line drawings replace the potential eyesores of construction. This resurfacing, however, is only superficial—entries for construction personel that cut into the fake façades bear no perspective line drawing, merely plywood and caution tape: 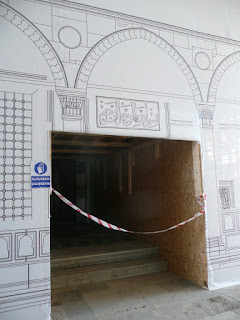 Here’s the side of that building: 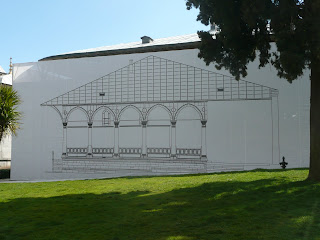 And the side not yet wrapped: 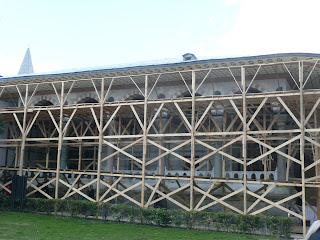 I saw several examples of this type of wrapping, at Topkapi palace (above), the Archaeological Museum (below), and elsewhere around town (subsequent images): 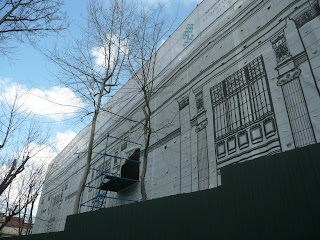 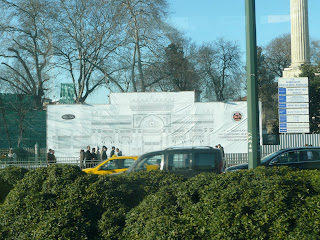 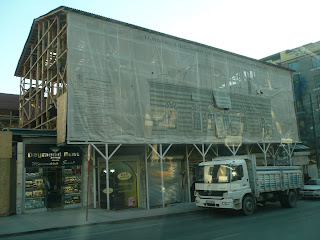 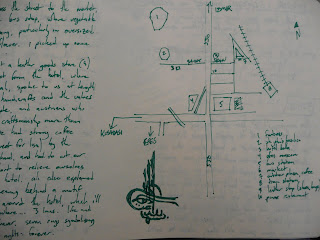 I saw this on a wall near my house: 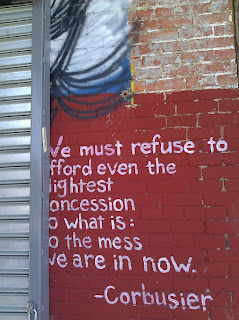 Makes me think the area is gentrifying! Oh, and that reminds me: 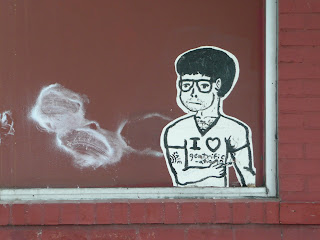 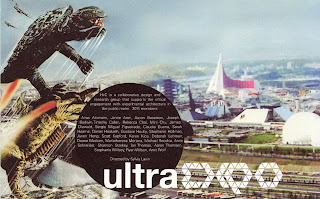 With Rumble out of the way, we’ve figured out the details of the five “pavilions” for our Ultra Expo exhibition, the final project for Sylvia Lavin’s class of the same title, to be held at JANM from July 13th-20th. Above is the flier for the event, which has been a long ten weeks in the making. Hope you’ll be able to join us!

Here’s the vinyl graphic I was working on for the US Pavilion: 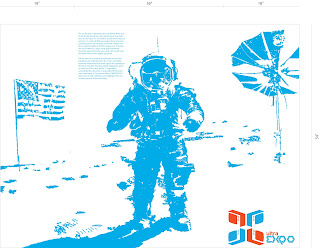