In studio, Neil has asked us to evaluate more parameters, but also to design at a human scale, which is one thing most parametric urbanist projects aren’t talking about. Parameters, you say? As it turns out, I have several of my own up my sleeve, having been dabbling in the realm of Grasshopper to form base units for our towers. It’s crazy because there’s an architecture and a beauty to the equations required to make a digital form, but so far the forms themselves are pretty bland. It would seem like an easy task to do something like tilt the axis of a building – and, in practice, it is. The problem is making the tilt less arbitrary. In Rhino, I can model something, then align the things I’ve modeled along a curve that’s tilted to whatever angle I choose. That’s all fine, but I really don’t want to go through the operations of tilting each tower when I have, say, 37 of them. That’s thirty-six repetitions of a task – which is where Grasshopper comes in. But it actually takes a few additional steps in GH to make it happen – it’s not just drawing a line – it’s drawing a line, defining its endpoints, and moving the endpoints, then redrawing the line to the new endpoints. Craziness. Now, at least, it’s up and running, but it took a lot of thinking on paper, like this: 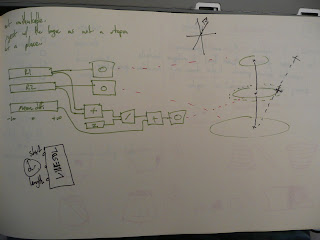 Today started with an amazing gingerbread waffle breakfast. Afterwards, it was a frenzy of museums around the Houston area, starting with the Rothko Chapel. A large octagonal structure filled with oversized canvases by the artist after whom the chapel was named, this place didn’t allow interior photography, so I had to settle for the postcard. But the artworks were quite impressive, and the overall effect was one of agnostic spiritualism.

Not far away was the Menil Collection, a fabulous private gallery with a plethora of works from all the greats: Picasso, Matisse, duChamp, Ernst, Braques, Rothko, Klein, de Chirico… we started off at the modern end of the gallery, which meant we saw all the best parts first. Still, quite impressive.

Next up was the Natural Science Museum, at which Lucy was being exhibited (she’s the 3.2 million-year old missing link type skeleton). We listened to a museum employee, who was on his lunch break but really excited about Lucy, explain about how she’d been found, etc, allthe while exclaiming how beautiful she was. We later hit up the energy exhibit, where Anna, my host for the weekend, explained what she did in the fields for ExxonMobil. Pretty interesting, since she knew what was going on so well.

Lastly, we hit the Museum of Fine Arts. This museum was spread between three buildings, all interconnected by underground tunnels, one of which had been done by the light artist James Turrell – it was an amazing corridor of purple light that seemed to have infinite space on either side of the walkway because of the rounded edges of the walls. Apparently the artist was once sued by someone who fell while leaning upon a wall that wasn’t actually there, just an illusion created by the lighting. We dashed through an exhibition that had just opened the evening prior, by John Alexander, then upstairs to the modern section (stopping on the way to see some works by Bill Brandt). Then next door, to the Miwa Yanagi exhibit, which was pretty fantastic as well – color photography, with a section of models done up to look like how they pictured themselves as they’d be as grandmothers.